When President Obama was sworn into office I was filled with an unbelievable amount of pride. He brought with him so much hope for the country. We all knew beyond any shadow of a doubt that Mr. Obama was going to be a president for all people.

Now the Obama Presidency has come to an end and we usher Donald Trump into the White House. I still don’t understand how the hell America let this happen. I’m pretty sure that you know how I feel about this man. I have not whispered my disdain for him and clearly, I am not alone. Protests are happening right now during the inauguration ceremonies. But not everyone has taken to the streets to protest. Many, like myself, have taken to Twitter with #NotMyPresident. 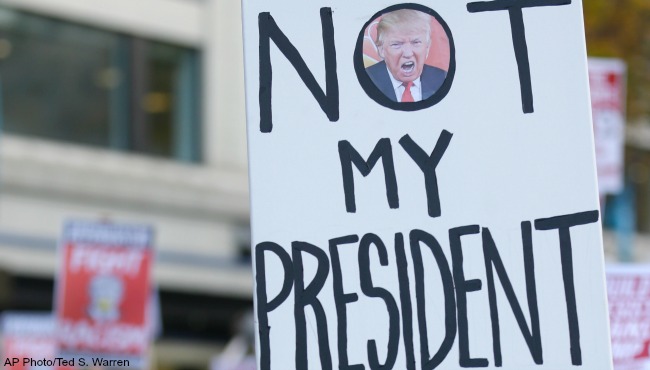 One person leading the Twitter charge of #NotMyPresident is NAACP Award winning author, Victoria Christopher Murray. Now while it’s clear that she’s opposed to a Trump presidency, I was curious as to her reasons why. So of course, I hit her up for a quick Q&A and it went a little something like this:

Q – Victoria, your views on the Trump Presidency are very strong and in clear opposition of him being ushered into office. What moved you to take such a hard stance against President Elect Trump?

Victoria – Actually, I have to back up a bit because when there was speculation that Donald Trump would run, I thought that could be interesting. I’m from New York and was always fascinated when Bloomberg was mayor because he ran the city like a business. I didn’t agree with many of his decisions, but I liked his management of government. So, I was intrigued by Donald Trump. I wouldn’t have supported him (because of the birther issue as well as the Central Park Five), but I was interested to hear what he had to say.

Then, he opened his mouth. When he came down that escalator and talked about Mexican and rapists, I was really surprised. And as time moved on and he talked about every single group in America, my surprise turned to contempt for a man who had such contempt for Americans.

So my stance against Trump comes from the fact that I don’t understand how a man who hates so many Americans can lead America.

Q – Do you feel that by selecting certain African American entertainers and figures that hail from a family entrenched in Civil Rights that he’s trying to become a man of all the people? Is this an authentic effort to help our community or just a show to hopefully pacify us?

Victoria – There is nothing authentic about Donald Trump, including that yellow hair that clashes with his orange skin. With all of my heart, I believe he has disdain for anyone who’s not like him — a rich white man. Yes, a few people will slip into his circle because green is also an important color to him. But everyone else that he parades in front of us, is never for us. Donald Trump believes what he says: that black people are poor, uneducated, unemployed and living in violent neighborhoods. All you have to do is look at Trump’s visceral response to Congressman John Lewis. The first thing Trump did was attack Congressman Lewis’s district as crime-infested. Have you been to Buckhead (an affluent section of the Congressman’s district)? Trump really believes that blacks are in one category. The parading is for white people so he can say, “See, I like the blacks. Some of my best friends are….” That’s why he’s chosen…how should I say this…acceptable blacks. Steve Harvey, Martin Luther King III. I don’t fault any of them for the meeting because we should try to get a seat at the table. However, I don’t like how Trump uses this as only a photo op for himself, so he can show the white voters.

Q – Do you feel that by proclaiming Trump not to be your president you’re disrespecting the office of the presidency?

Stacey – If you could personally deliver one message to Trump, what would it be?

Victoria – #NotMyPresident. Sorry, that’s about all I have for him right now.

I’d like to thank Victoria for her time and honesty. Her award-winning novel, Stand Your Ground is available everywhere books are sold.